Jose Nine, a ProKids volunteer who has served dozens of children, was named Su Casa Hispanic Ministry’s Padrino of Unaccompanied Minors at the Catholic Charities event April 20. The organization also recognized ProKids itself as its Organization of the Year. 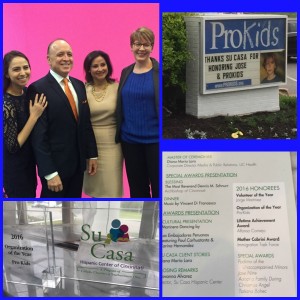 ProKids has been asked by Hamilton County Juvenile Court to advocate for unaccompanied minors, often immigrants from Honduras, Guatemala and El Salvador, seeing that they are living in a safe and nurturing home in our community.

Su Casa is a program of Catholic Charities of Southwest Ohio. Founded in 1997, Su Casa is the primary provider of social, educational, language, employment and health care services to the Hispanic/Latino community in Greater Cincinnati.  The mission is self-sufficiency for the poor and vulnerable of the immigrant community.

At left, Jose Nine and his daughter, Gabriela, and wife, Josefina Magallanes-Nine, celebrate at the Su Casa event with ProKids Executive Director Tracy Cook. ProKids marked the occasion by displaying the award and gala program, as well as by marking the sign at the corner of William Howard Taft and Burnet avenues.