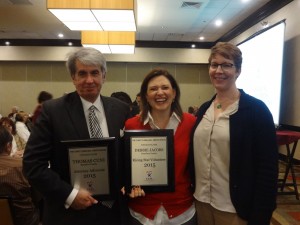 The Ohio CASA celebration culminated in two ProKids volunteers being honored: Board President Thomas Cuni as the Volunteer Attorney of the Year and CASA Volunteer Debbie Jacobs as the Rising Star Volunteer of the Year. The two were celebrated for their passion and commitment.

Tom, whose practice is headquartered in Woodlawn, began volunteering in court for ProKids while serving as ProKids board president. A member of the board since 2010, he said he knew little about juvenile court. For a year, the transactional lawyer studied juvenile law and sought mentoring from retired Juvenile Court Judge Thomas Lipps. He shadowed ProKids attorneys in court and in the fall of 2014, he took his first case.

Charlotte Caples, ProKids CASA program director, says that although Tom was new to Juvenile Court, he did not shy away from contentious cases. “He is able to work well with everyone,” she says. “In a difficult case, he was able to advocate for the ProKids position very effectively and we were able to serve the children’s best interest. Tom is assertive, when it comes to our children, yet professional. And you can tell that he is well respected by the magistrates and other attorneys.”

“Most importantly, Tom understands the vital importance of advocating both for the agency and the individual child,” Cook said. “He knows CASA Volunteers are the key to our outcomes and he treats them all with something like reverence,” Tracy says. “Whether in his role as Board President, in Court, at the CBA, or in the community, there is not a part of ProKids he has not touched.”

Debbie, who lives in Loveland, was named as OCASA’s Rising Star Volunteer of the Year Award-winner, an honor reserved for those who have served less than two year as a CASA Volunteer.

Debbie began training in the CASA University program at ProKids in September 2013 and took her first case that December, nearly a decade after first reading about ProKids in the local newspaper. She had saved that clipping believing her organizational skills, interest in the law and commitment to serving others would be a good fit at ProKids when her youngest child was in school.

In the time she has served as a ProKids CASA Volunteer, Debbie has had five cases involving 17 children and worked with two staff CASA Managers at ProKids.

She also has worked with both ProKids staff and community professionals to make sure the children’s needs are met and she is “pleasantly persistent” in doing so. For example, on one case she advocated consistently for Job & Family Services to complete the process for a family to get a kinship care allocation which it was entitled to for the children. On another case, she researched swim lessons for a child and then connected the foster family to the needed funding.

On one of her cases, Debbie knew the four children were best served by remaining with their grandmother, a caring woman who had been with them since they were very young. But the grandmother was nervous about taking on a permanent, formal commitment to the children. Debbie patiently listened to her concerns, suggested she use a journal to begin to think about her future, found an online budget tool to help her assess her finances and let her know that she supported her in her efforts to provide a forever home to the children. Thanks to Debbie’s support, the grandmother accepted permanent custody of the children and the family is doing well today.

Those who have worked with Debbie call her a “natural” and remark on her easygoing ability to work with both professionals and families. They enjoy her stories of playing Ants in Your Pants with the children and her optimistic nature. But mostly, they note how the children she has worked with are better off than they would have been because Debbie spoke up for them as a ProKids CASA Volunteer.